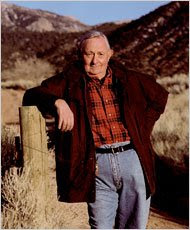 You write for two people,
yourself and your audience,
who are usually better educated
and at least as smart."
Tony Hillerman 1925-2008
Mystery writer Tony Hillerman, 83, died Sunday, October 26, 2008. For those of us who read his mysteries we know what a loss it is; for those who haven't been introduced to Hillerman, take a chance. Hillerman wrote over 29 books, most of them mysteries, set in the Southwest and featured Navajo police officers Joe Leaphorn and Jim Chee. Hillerman wanted to help the Anglo culture understand Navajo traditions while sharing his admiration of the Navajo culture. His love of the Southwest shone through in all of his books, fiction and non-fiction.
If you enjoy mysteries, the Southwest, and learning about the culture of Indians, you are in for a treat. Hillerman introduces us to his favorite passion, the Navajo and their culture, how they think, how the Anglo had changed their way of life, and how both cultures learn to except each other and live along side each other. His mysteries would take you deeper in the history of the Navajo and you will be amazed what you learn from reading about them in fiction style. The Navajo honored him with the Special Friend of the Dineh award to thank him for letting his readers know that were more then primitive people. On that, he succeeded.
Hillerman never forgot who he was writing for, his audience, and to entertain them. He was also a writer that you could read them faster then he could write them....which is important to me as a reader. Writers who push three, four or more books a year I feel are not considerate to their readers. (That's for another blog)
If you are looking for a new mystery writer, something different, I highly recommend Tony Hillerman. You will be glad you did.
Thanks Mr. Hillerman for some wonderful mysteries, books, and enabling us, as readers, to learn about the Navajo people. You will be missed.