"In the information society, nobody thinks.
We expect to banish paper, but we acturally
banish thought."
Michael Crichton 1942-2008 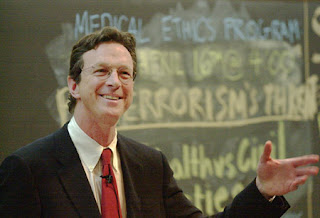 I was saddened when I heard that another writer had died. That makes three in the last few works and I hope the last one for a while.

Michael Crichton was a thriller writer best known for Jurassic Park, Rising Sun, Andromeda Strain and Disclosure. Many of his books were made into movies,. Jurassic Park gave him high profile attention when it was made into a movie directed by his friend, Steven Spielberg, who he also created the TV show ER with. Crichton also directed many of his books into movies as well as directing others.

Michael Crichton believed that we all should challenge our preconceived notions of the world around us and with his books, he did just that. Thanks.
"They are focused on whether they can do something. They never think whether they should do something."
I really liked this quote from Michael Crichton; gives you something to think about.
Posted by Bev at 10:55 AM