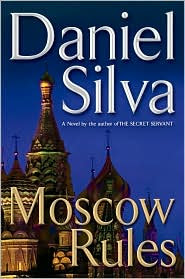 I've traveled the world twice over,
Met the famous; saints and sinners,
Poets and artists, kings and queens,
Old stars and hopeful beginners,
I've been where no-one's been before,
Learned the secrets from writers and cooks,
All with one library ticket
To the wonderful world of books.
Unknown
Great quote, and I think it fits my review of this book beautifully!
Moscow Rules
Daniel Silva
Moscow Rules is the 8th book in the Gabriel Allon series by Daniel Silva. If you haven't read any of the series, let me introduce you to Gabriel Allon: one of the top agents in the Israeli-Intelligence agency, Mossad; talented, gifted, moody, but when he has to go on a mission his fellow operatives line up to work with him. His true passion is art restoration and Allon is one of the top art restorers in the world. The time, care, respect and love he gives his paintings overflows into his missions. No matter how many times Allon has told Mossad he is retired, when they need him, off he goes.
How has Russia changed since the fall of communism? Is Russia happier? Is life better? Besides Russia becoming a country of very wealthy people, how have they fared since the Cold War? Silva, who went to Moscow for his research, doesn't give that impression. Here he gives us insight on the current political climate, Russians are still anti-American, they smile at your face, but be careful turning your back. The new (rich) Russians have easy access to all of Europe and brought back to Moscow what they consider the best of Europe, but made it bigger. It is mentioned several times that Russia has to have the biggest of anything and everything in the world, the biggest this, the biggest that, so it would stand to reason that they would have the biggest arms dealer in the world.
In Moscow Rules, Allon is sent to bring down Russian businessman Ivan Kharkov, who is the world's biggest arms dealer. He sells to the highest bidder, no matter who they are. Kharkov is very wealthy, powerful and ruthless....and plans to stay that way. If anyone gets in his way, they won't be there for long. Two newspaper reporters who attempted to investigate him and his dealings have ended up dead. Since his current clients include al-Qaeda terrorists, America and Israel are very interested in him. To accomplish their mission it is decided to use Kharkov's wife, and luckily, she is an art lover.
It is very unusual, but we have the Israelis. Americans, British and French secret agencies working together to accomplish this very intricate, delicate, dangerous mission that takes the agents all over the world, and into Moscow, where people still can disappear. It seems there really are Moscow rules, every spy and intelligence agent knows them---no matter which agency they are attached to.
In the Allon series, when all the pieces have been put together, when it's time to put everything in motion, when the players are all in place and the clock has started ticking.... the pace picks up and I don't care what time it is, I am going to get to the last page....I just need to know how it ends.
I read Silva's first book in 1996, The Unlikely Spy, and he had me hooked. This is one of my favorite books to recommend to people and when they come back and rave about it I like the fact it is still holding up. For me, Silva is one of the best espionage writers today; he has been compared to Forsyth, Ludlum and le Carre. (Okay, personally....I don't think anyone can touch le Carre, especially his early stuff.)
Daniel Silva has another page turner. I enjoyed it, couldn't put it down. After reading this, I will not be going to Moscow...ever. (I don't think Silva should go back either.) Silva usually takes current events and entwines them in his thrillers. If you haven't read Daniel Silva, give yourself a treat and pick one up. I recommend him to anyone who enjoys thrillers and they come back and rave about him.
I am looking forward to Gabriel Allon's next adventure in The Defector this summer. From what I have read and heard, it will be a continuation of Moscow Rules. Someone Allon thought was a friend, well, let's just say that things aren't always what they appear.

Bev,
Thank you very much for this wonderful post. Daniel is on deadline copyediting The Defector, but he will be thrilled when I read this to him tonight.
Many thanks for reading and for taking the time to write.
All best,
Jamie Gangel

Hi Jamie...
Thank you for your response! Your husband is one of my all-time favorite authors as well as being one of the best writers we have today in this genre. I could go on and on about his books. I am looking forward to the Defector this summer.
As a Readers Advisor, he makes my job easy. Thank him for me.