Whenever this week comes around I remember my experience with books that were thought improper for a school library.


When I was president of the local school board, the first Harry Potter book came out. I wasn't familar with it, but it had gotten good reviews and the kids were READING! An amazing thing, as some of us know getting some kids to read can become quite an endeavor. I had several phone calls, and a few visits from parents who were upset it was allowed in the school library, concerned it was about witchcraft. Heck, my kids were reading it..and loved it and shared what they were readng with me. I picked up the book and read it, the better to know what I was defending. I liked it: witches, magic, sorcerers, adventure, good vs. evil...what could be better for a child's imagination? It was full of so much more then...witchcraft. Some parents felt strongly that is was not a book for children, did not want their children to read the book and it shouldn't be allowed on school library shelves. Okay....simple questions, why don't you tell your kids not to read it? What about the parents who want their kids to read it? I was amazed that there was still such an uproar about certain books.


Along with Harry Potter, here is a small list of books that were banned, or have been challenged:

James and the Giant Peach-Roald Dahl


Stephen King, Shakespeare, Mark Twain and Judy Blume have several books on this very long list. Pick up any one of these books, see if you can figure out what caused an uproar about a certain book.

While I do believe that parents should pay attention to what their children are reading, they shouldn't be allowed to decide what other children should be allowed to read. Nobody should make the decision about what I, or anybody else, can read. It's a simple freedom, freedom of choice.

Harry Potter, and the rest of the books in the series, stayed on the school library shelves. Hard to believe, with the popularity of the books and the movies, this series remains banned in parts of the country and continues to be one of the most challenged books today.

As was said so well: 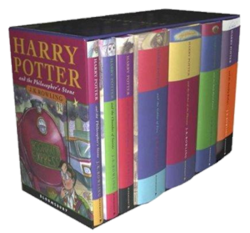 Hear, hear, Bev. Thanks for this.

Thanks le0pard13...I will tell you that our banned books display has been an eyeopener for many people. What people don't realize is there are still books that are challenged or banned today here in the USA...and all over the world. So tell me, what banned book are you going to read?
;-)

I could cheat and say the American Heritage Dictionary (banned at one time by the state of Missouri in '78 for objectionable words, and I read something out of it almost every day). But, I'll pick something I've always wanted to read, but haven't. Harper Lee's To Kill a Mockingbird. Thanks, Bev.

Haha, thanks for not cheating...but ah, you have picked one of my all time favorites. I revisit it every few years and have to say, it's never the same. Please let me know what you think when you finish. Watch the movie when you're done, it's great!
As always, thanks for stopping by!

Bev, I sent you props for you mentioning Banned Books Week. Thanks.