All our times have come
Here but now they're gone
Seasons don't fear the reaper
Nor do the wind, the sun or the rain...
we can be like they are

Halloween~~the time of year where some people like to scare the wits out of themselves to ensure they are ready to celebrate with the true spirit of the night....and yes,  I am one of those people. There's nothing like locking the doors, windows, I don't close the blinds because if something is going to come get me~~I want to see it or them.

In no particular order, here is a list of some my favorites scary/creepy books made into a movie or TV mini-series.

Come on baby...don't fear the reaper
We'll be able to fly...

Invasion of the Body Snatchers ( 1956) Based on the book by Jack Finney's, The Body Snatchers.
When some of Dr. Miles Bennell patients start telling him that their family members just aren't the same, he and his psychiatrist buddy blame it on epidemic paranoia. By the time Bennell realizes there is more going on then he thought~~like finding a decomposing body turning into dust with a giant pod next to it becoming the copy of the body~~there are only a handful of normal people left. The tension builds slowly, and the enemy isn't a alien you can see, they look just like your friends and loved one. The big problem is trying to stay awake because the Pod People take over the body while you are sleeping, even if you just doze off. When some of his friends are caught and made to sleep, they become Pod People, Bennell ends up running down a major highway trying to spread the word yelling...."They're here already! You're next! You're next!" while starring into the camera.... Does anybody listen? Will the Pod People take over? What are those trucks rolling down the highway filled with?
This is on the list of  the best science fiction movies ever. Kevin McCarthy and Dana Wynter starred in it~~It is a classic, and they did a great job with Finney's book. (The original!) 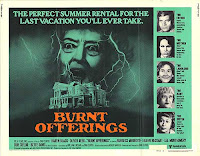 Does it get any better then leaving Queens NY and heading out to mansion-sit for the summer on Long Island? In the book the Rolf family, Marian, Ben, son David and aging Aunt Elizabeth do, but in the movie they go from a city in California to a mansion in the California countryside.  Besides taking care of the mansion, they are instructed to take care of the reclusive mother that lives upstairs. Just leave the food outside the door, don't try and interact with her. Strange things begin to happen, death, depression, accidents~~and every time there is an accident or someone dies or gets hurt, the house rejuvenates, flowers bloom, woodwork shines and the pool gets cleaner. When the family begins to realize somethings not right and try to get away, trees fall into the road, the car doesn't start or some other inconvenience occurs. Goose bumps as we come to the end of the book and the movie. Is that really the wind rattling the windows? Karen Black, Oliver Reed and Bette Davis starred in it.

(again, watch the original, not the 1999 version)
Dr. Markway wants to find scientific evidence of the paranormal, so he invites three people, Eleanor, Theodora and Luke, who have experienced the paranormal, to come to Hill House for a few weeks. Seems the caretakers won't stay near the house after dark, they lock the gate and go home and won't return until the morning. Plus, nobody else has a key to the gate.....any one's radar start to go off about now? The four strangers get to know each other, and Dr. Markway fills the other three in on the house history~~suicide, death, the usual strange goings on in a old house; doors that have heartbeats, walls that moan...and a portrait of the dead owner whose spirit comes to life. Nobody chooses to leave, because seeing/hearing is believing right? To this day, one of the best ghost stories ever written, and the movie shows that you don't need blood and gore to make the hair on the back of your neck stand up. Julie Harris, Claire Bloom, Richard Johnson and Russ Tamblyn starred in this one.


Then the door was open and the wind appeared
The candles blew then disappeared
The curtains flew then he appeared...saying don't be afraid
Come on baby...and she no fear

If there was a book that will make you think twice about swimming, this is the book. When the remains of a dead girl washes up on the beach, Sheriff Brody is told she died from a shark attack. Sheriff Brody wants to close the beaches because of the shark attack, but hey! It's summer and it is the time of year that Long Islanders make their money so Mayor Vaughn nixes that silly idea. The book grabbed me right away and they did a wonderful job with the movie. The timing of the release of the movie was great, the beginning of the summer, and close to where I live. The music in the movie built of the tension...dun dun dun dun...SHARK! We all searched the horizon for fins before we jumped in the ocean that summer...mostly we sat on the beach. Roy Scheider, Richard Dreyfuss, and  Robert Shaw starred in this.
And she ran to him....then they started to fly
They looked backward and said goodby...

she had become like they are
Salem's Lot (1979) based on Salem's Lot by Stephen King
Okay, while reading this book, years ago~~I didn't sleep much for the next few weeks. When Tobe Hooper was doing the mini-series for TV, yes I had to watch it. Hooper and King~~talk about great minds... I did have the doors locked, windows bared, wore my three cross necklaces (all at once) just happened to have a nice piece of wood handy....and any kids flying around after dark were not allowed in, even if I knew them. For me, this is one of the scariest, creepiest books I have read, and the series did the book justice. Once again we have a creepy house with a bad history. Ben Mears is a writer who returns to his home town, Salem's Lot, after 25 years to write a book about the creepy Marsten House. Mears also was hoping to rent it~~someone beat him to it.  Shortly after this, a young boy is killed and strange things begin to happen. Seems the boy isn't dead, he has been turned into a vampire and beginning with his brother, starts to turn others into the undead. This is one of  Stephen King's early books and still one of his most popular. Just thinking about it, I will make sure I am home before dark~~and lock, bar the doors and windows. David Soul, Bonnie Bedelia star in this with the wonderfully sinister James Mason as the ancient vampire's familiar.


She had taken his hand....she had become like they are
Come on baby....don't fear the reaper.
(Thanks to Blue Oyster Cult)

I know there are many more to choose from, I had to narrow the list down, but these are a couple that I have fond (?) memories of, and I wanted to choose those that I thought were great scary books that had been done justice by the movie or mini-series.


Lock the doors~~turn the lights on~~check one of these out, movie or the book.

This is one solid set of books and films for this season, Bev. It's also a great choice of music and lyrics to thread it through. I always remember how director John Carpenter used this tune so forebodingly in his seminal film, HALLOWEEN. Great post! Thanks.

Thank you for enjoying it! Yeah, I remember Carpenter doing that. Always important to match the music to the blog:)Thanks for stopping by and commenting~~like to hear from you.
(Still working on the movie blog :))