Whenever science makes a discovery,
the devil grabs it while the angels are debating the best way to use it.
Alan Valentine

The Immortal Life of Henrietta Lacks
by Rebecca Skloot 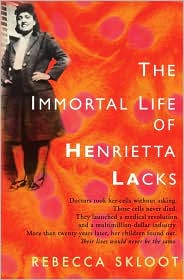 This is a fascinating account of how one woman became one of the most important people in the world and would never know it. Insight into science, medicine, racism, poverty, cancer and how things were in 1951 all come together is this eyeopener of a book.
Henrietta Lacks, unknowingly, was the mother of the HeLa cells. These were the only human cells to live and reproduce outside of the body. If you could pile all Henrietta's cells and weigh them, they would weigh over 50 million metric tons. Thanks to the HeLa cells, we came to have the polio vaccine, uncovered secrets about cancer, help for a cure for HIV and AIDS. They advanced sciece with invitro- fertilization, cloning, gene mapping and effects of the fall-out from the atomic bomb. HeLa cells went into space on one of the first space flights to see how human cells reacted in space. All these amazing miracles from one woman who died in 1951 of cervical cancer in John Hopkins Hospital.
One of the things that science and doctors were trying to do during this era was reproduce human cells to do research on, and until Henrietta, this had never happened. Healthy cells and cancerous cells were removed from Henrietta before her surgery, without her knowledge,  and sent out to see if they would live outside the body. Henrietta was not the first to have cells removed and sent out to see if they lived and reproduced outside the body, it was something done on other patients, but hers were different. Doctors were astounded to find that Henrietta cells not only lived, but reproduced at an amazing rate. You can imagine the excitement with this discovery.

Skloot does a wonderful job of putting a face on the woman behind the cells. The background on Henrietta Lacks isn't always happy; a poor, young black woman who worked on the family tobacco farm, raised in a house full of relatives after her mother died; she had five children of her own before she was 32. This didn't stop Henrietta from going out and dancing with her cousin Sophie at the local jazz place. Henrietta knew something was wrong with her, Henrietta went to John Hopkins Hospital several times before they discovered  her cervical cancer. The treatment for women with cervical cancer will make your mouth hang open, but again, it was 1951 and this was how it was treated.

So begins the story of the wondrous and amazing things that the world has this woman to thank for.

While the HeLa cells became a multi-million dollar business, Henrietta's family was unaware of this. While the name of the originator of the HeLa cells was well known among the medical and scientific community~~doctors even went back to the family to take more blood tests to see if they had cells that reproduced also, telling the family they were testing to make sure they didn't have cancer like the one that killed their mother.

The HeLa cells became a multi-million dollar business for some, a medical marvel for doctors and a scientific bonanza for research, the Lacks family had no knowledge of any of this.

It took Skloot time and patience to earn the trust of the Lacks family. Other reporters had come around and it hadn't gone well. The family was wary of what Skloot would get out of writing a book about Henrietta, they had no idea what was accomplished from Henrietta cells. While some of the family wanted monetary reimbursement for the selling of her cells, they also wanted recognition for Henrietta from the medical and scientific fields.

I had to keep reminding myself that this happened in Baltimore, not the deep South. The Lacks family was alarmed to find that Henrietta's cells were still alive and reproducing. They envisioned that there were clones of Henrietta walking around England; that her cells were used to make half-human half-animal creatures; did it hurt when they injected viruses into her cells to infect them to see how they would react. Most of all, if Henrietta was so important to medicine and science, how come her children couldn't afford health insurance?

This is a non-fiction that reads like fiction~~I read it in three days because I couldn't put it down. I stayed up until 2 in the morning reading it. It was the most fascinating book I have read in a long time and the best book I read this year. This book is so rich in information about science, medicine, and how one person can unknowingly change the world. Skoolt takes no sides on who was right and who was wrong with what transpired. Was it ethically right what was done to Henrietta Lacks? Was it morally right what the family went though?

For me, I cannot recommend this book highly enough. Put it on your to read list, you will be so glad you did.

I've heard that this is one remarkable read, and your equally wonderful review proves that. And, it is on audiobook, too. I hope to check this out soon, Bev. Thanks for this.

Trust me, you will be glad you did. I can't say enough about this book. We did it for book discussion, and we had some discussion. Please let me know what you think when you're done.
Thanks for dropping by le0pard13, always a pleasure.

I've sent props your way for this review, Bev. Because of you, I read one of the best books this year. Many thanks.

Glad you thought so. I gave it out as my book gift this year~~this is one I will read again. Thank you!

Excellent review, Bev! So glad lp13 sent me your way. Now to decide if I want form of the book to get. ;)

Thanks Christine~~for stopping by and enjoying the review. Whatever form of the book you do, you will be glad you did, it's great.
Thanks to my friend lp13 for sending you this way! Hope you stop by again. Happy New Year!