It seems that the last couple of posts have been about authors that have died, and sadly that has been true. Once again we say so long to three wonderful writers who have died in the last few weeks, and we have just begun 2009!

Thank you John Mortimer for creating such a unique character....the quintessential British barrister, Horace Rumpole of the Bailey. I must that I loved the books and enjoyed the series. For some reason the British seem to get it right; Leo McKern was the perfect actor to play this part and when I read the books, I saw McKern in the pages. I always felt that Rumpole was really Mortimer. Thank you John Mortimer for one of the characters ever written,....and brought so brilliantly to the small screen. I raise my glass to you with a smile. I do hope you and Leo McKern are enjoying reminiscing. If you want to spend some time "cozied" up with enjoyment, pick up a Rumpole of the Bailey by John Mortimer, or watch the series...you will be glad you did.

If you know Harry Rabbit Angstrom you have read or heard of John Updike. Updike's "Rabbit" quartet has had a big following from the first one that came out in 1966. Updike style of writing was looked upon two ways, those who felt his writing was a type of poetry, and those who felt he wrote with more style then content. John Updike last book will come out in the June, "My Father's Tears and Other Stories." If you haven't read Updike, take a chance...meet "Rabbit" and see which style you agree with. 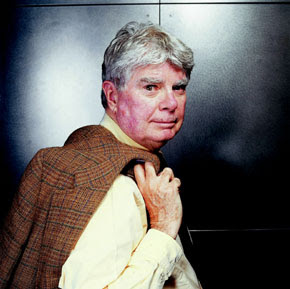 I met James Brady twice and he was very nice. I chatted about his books that I had read, how much I liked them, and what I thought about them. He listened, said thanks, and continued on his way. The fact that he had taken the time to listen to me and chat is a nice memory. Besides writing a column for Parade magazine, he wrote several books that meant a lot to people. His book on Korea, "The Coldest War," brought back memories to several soldiers who had been there. As they told me, Brady told it "how it was. Someone finally told the truth about Korea."

I enjoyed James Brady, couldn't really connect with John Updike, and loved John Mortimer. All three brought something wonderful, and different, to world of literature and we were lucky to benefit from them.
Posted by Bev at 2:15 PM