"I have never met a vampire personally,
but I don't know what might happen tomorrow."
Bela Lugosi

Dead and Gone
by Charlaine Harris

I just finished the latest book in one of my favorite series and loved it. I have mentioned this series before, the Sookie Stakehouse series by Charlaine Harris. This is one I always look forward to and can count on enjoying. 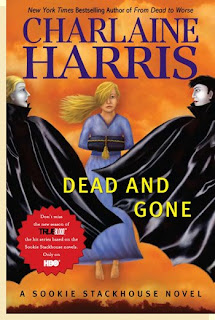 The vampires have been "out" to the public for a few years. There is nothing for humans to fear, because the Japanese invented a special drink, True Blood, which after 30 seconds in the microwave is almost like the real thing and this way the vamps don't need to "feed" on humans. Since the vamps have matriculated pretty well, other supernatural beings have decided to come "out." The weres and the shifters have decided it's time for the world to know they exist too. Sookie is working at Merlotte's Bar when it appears that time is now. There, on live television, everyone watches as a young girl changes into a werewolf, then in the bar, people watch as some of their bar buddies change into, well, their animal shape. Shifters can change into dogs, cats, horses...who knew that besides werewolves, there were wereseals?
Wereeagles?Werepanthers? Werepigs...the list goes on and on! It seems that weres can be just about any animal. Some are born this way, others are "bitten" into it. Only the eldest child of a pure blood shifter couple will be a shifter. Unlike with vampires, you can't be born a vampire, you have to be bitten to become one. After the initial shock of who has been living next door to them starts to wear off, it appears that while most people can live with strange beings, not everyone is okay with it...one husband shoots his wife when she changes in front of him-since he had no idea he was married to someone who could change into a dog-it came as a big shock to him. When a female werepanther is found dead, the hope for a understanding and being able to all just get along seems to be slim.
Besides dealing with trying to stop the weres from going to war over the death of one of their own, telepathic Sookie has the FBI interested in her abilities, there is a rebel uprising among the fairies, the vampires are in the mist of a political overhaul and Sookie has to grapple with her feelings for Eric, the viking vampire.
Vampires, shifters, weres, fairies, alcoholics, murder, sex, the FBI, and oh yeah...a little romance. What more can you ask for? Take a visit on the supernatural side.
So much going on in Bon Temps, Louisiana with one person involved in the midst of it all: Sookie Stackhouse. The life of our favorite waitress is never dull!
Posted by Bev at 1:44 PM