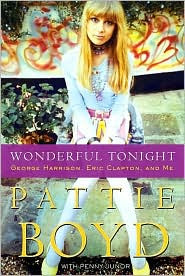 Good friends, good books and a sleepy conscience:
this is the ideal life.
Mark Twain
Wonderful Tonight
George Harrison, Eric Clapton and Me
Patti Boyd
A few years ago Pattie Boyd wrote a book about her life and I knew I had to get around to reading it. Here was the woman who had lived my fantasy life—married to George Harrison AND Eric Clapton! Talk about lucky....it doesn't get any better then then having married two of my favorite musicans.

George Harrison was always been my favorite Beatle, and Clapton-well he's Clapton. He played with so many great groups, Blind Faith, Cream, Yardbirds, Derek and the Dominos, Delany and Bonnie… some of the best from the sixties and seventies. Ms. Boyd had married two of the most famous musicians of all time and she inspired them to write some great songs, and they were about her; Something, I Need You, by Harrison—Layla, Wonderful Tonight, Old Love by Clapton….. just to name a few. How did one woman become the muse to two of the most gifted and talented rockers in history?

Ms. Boyd was a teenager on the set of the movie A Hard Days Night when she met Harrison. He asked her out on the second day....she said no, as she had a boyfriend When he asked her out again she said yes. (The boyfriend was gone) It was a whirlwind time, Boyd's modeling career was taking off and the Beatles-they ruled the music world. Boyd and Harrison married and it being the 1960’s, they entered the world of sex, drugs and rock & roll. Boyd and Harrison adored each other and were very happy, which she makes evident. They moved in a world of rock ‘n roll royalty which included the Rolling Stones, the Who, Mick Fleetwood, and Eric Clapton. Living a life so public can have it's toll, and living the life that you are expected to live can bring some unpleasentness with it.
Clapton was Harrisons best friend and living with Boyd’s sister Paula at the time. Clapton and Harrison spent a lot of time together having dueling guitar sessions, making music, drinking and doing drugs. Clapton fell in love with his best friend’s wife, and wanted her. By now, the Harrison marriage had hit a rocky time, but both wanted to try and work it out. Clapton pursued Boyd, even in front of Harrison. Getting nowhere, Clapton put his

passion and feelings for her into the song Layla. Eventually, as we know, he succeeded in getting Boyd to leave Harrison for him. Clapton seemed to adore Boyd, their life together wasn’t what she had hoped. Here again, it was sex, drugs and rock & roll and went downhill quickly.
Ms. Boyd’s early life was interesting; she grew up in Africa and came from a dysfunctional family. It wasn’t an easy childhood and, as she states, you do become a product of your upbringing. Did she enable Harrison and Clapton? Wanting to be what she thought they wanted her to be she joined in with the drugs and alcohol. Letting herself be treated the way they treated her was what she had observed in her own family growing up and so she accepted it. Being strong enough to walk away from everything took courage. The fact that both Harrison and Clapton kept in touch with her after the divorces, even when they remarried, does say a lot about how they felt about her. When Clapton’s son died, Boyd was one of the first people he called. He asked her to come to his son’s funeral. Harrison kept in touch with her, visiting her, making sure she was doing okay; he had told her if she ever needed anything, he would be there for her. When Harrison died, Boyd had a hard time grasping that she had lost such a big part of her life, and her friend.
What happens in your life makes you who you become; Boyd came out the other side stronger and happy with being Pattie Boyd. This is her story, how she remembers it and what she wants to share. She doesn’t really “dish the dirt” and I was so glad she didn't and I do respect her for it.
Did I like the book? Yes, I liked it very much. Did I wish there had been more? Yes, but sometimes you always want more from a book. I am going to pick up Clapton's book, it always great when you get both sides of the story.
She still lived my fantasy........ and I am glad I didn't.
Happy Reading!
Posted by Bev at 10:56 AM

I very much agree she's lived an extraordinary life. I can't even imagine it. Wonderful book review, Bev. Thank you much.

Thanks le0pard! It was an interesting book and I do admire where she is now. I just finished Clapton....well, he IS Clapton. I have such happy memories of him and his music. That's for another blog^^
I am so glad you stopped by. Thank you.