Oh, the weather outside is frightful,


When you are in this situation, read a book. This time of year, when I pick up a book to read, I want it to be about Christmas, I want to be able to read it in a day or two, and I want a warm, fuzzy feeling when I'm done. With that in mind, I have a list of some of the best Christmas stories I have read over the years..that fit my criteria.


A Christmas Memory by Truman Capote 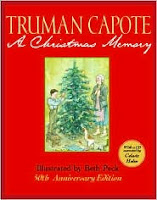 Capote tale of the wonderful relationship between an orphaned boy and elderly woman gives you a warm glow. The making of the fruitcakes and the homemade gifts as they prepare for Christmas, the feelings they have for one another....eating the remains of the fruitcake and getting a little tipsy. Set in Alabama in the 1930's, it is about a time long gone when times where simpler. A little gem of a story.

Who sometimes doesn't wish to just opt out of Christmas? Funny story about Luther and Nora Krank who decide to skip Christmas when their only child tells them she isn't coming home for Christmas. They decide to go on a cruise. The neighbors are furious when the Kranks don't put up any decorations and make clear they are forgoing Christmas. Last minute shenanigans ensue when, at the last minute, their daughter calls Christmas Eve as they are sneaking out of their house and she has decided to come home and wants to celebrate their usual family holiday. The whole neighborhood springs into action to save Christmas for the Kranks.


A Redbird Christmas by Fannie Flagg

After being told by his doctor that this could be his last Christmas ever, 52-year old Oswald T. Campbell leaves cold wintry Chicago and heads to Lost River, Alabama. One grocery store...and the local cardinal, a redbird called Jack...and with attempts to fix him up with a widow, things are different. When Oswald and his new friends become involved with abandoned, crippled young Patsy, the tugging at the heartstrings begin. Will there be snow for Christmas? Will Oswald make it to another Christmas? Will Flagg combine sass with love, humor and charm? Will she get you get a little teary-eyed? Oh yeah.


A Christmas Blizzard by Garrison Keillor

If you enjoy Keillor like I do, give this a go. If you like audio, definitely listen to it read by Keillor. I always like an authors interpretation of their books. On his way to Hawaii for Christmas, our traveller is summoned to his sick Aunt's side and ends up spending it in his North Dakota hometown instead during a blizzard. The electricity goes out and lo' and behold our traveller is visited by friends from his past, and some historical figures pop in....he hears angles singing, the silence of the night amazes him...and it changes things for him and how he will live his life. Humor and the heartstrings pull here!


A Blue and Gray Christmas by Joan Medlicott

I love Medlicott "Ladies of Covington" series, so this one I was looking forward to cozing up with. When the Ladies of Covington find an old tin box, they find letters inside written by two Civil War soldiers, one an Union soldier and one an Confederate soldier. The discovery of the contents in the box turns this into an historical saga. Another wonderful heart tugger....I was sorry to close the last page.
*Note-I love Medlicott's Ladies series. It is definitely one to cozy up with in front of the fire during the cold months.

The Christmas Letters by Lee Smith

Another author I love to read. This book is three generations of women who write a Christmas letter every year, beginning in 1944-1996. They share what the past year has brought them, both good and bad. A charmer of a read.

I discovered this book a few years ago. I gave it as gifts to those of my friends who had teenage daughters.

This is based on a true story about Mr. Romp, his wife, and three children who for ten years have come from Vermont to New York City to sell their Christmas trees. Romp's daughter, his right hand, the one who he counts on to make sure all is running smoothly is on the cusp of becoming a teenager, and not as interested in the tree business as in the past. Traditions are wonderful, but what happens when new traditions come around?

The Polar Express by Chis Ban Allsburg
This book brings back such happy memories for me! This was the book I read Christmas Eve to my girls, and my oldest had a bell she kept with her that she jingle during the night. I still read it, to anyone who will listen. Ah, this one makes me smile.

I hope one of one of these give you a wonderful happy holiday reading!

Thanks, Bev. You helped me pick out a gift.

Glad I could help! Thanks for stopping by, always nice to hear from you.