One Thousand White Women: The Journals of May Dodd

The worth of a book is to be measured
by what you can carry away from it.
James Bryce


One Thousand White Women: The Journals of May Dodd 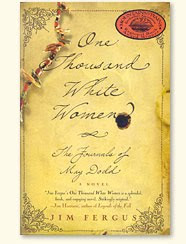 I love books based on "what if?" One Thousand White Women is very much a "what if" book.
While this is fiction, it is based on an historical fact. In 1875, the chief of the Cheyenne, Lone Wolf, came to Washington and met with President Grant. Knowing that the way of life of the Indian was changing, he requested "Brides for Indians," he offered one thousand horses for one thousand white women. The idea being that the white women would marry the Cheyenne, have a baby, and therefore assimilate the Indians into the white man's world and hopefully bring peace between the two. That's the fact, now we begin the fiction.

While publicly Grant was aghast, secretly he gave his consent to send one thousand white women to the Cheyenne. Recruiters went to jails, mental institutions, debtors' prisons, and were sent out to find women to fill the quota. May Dodd was in the first group to head west, having been recruited from a mental institution. She joined quite a cast of characters when they were loaded on the train to take them to Indian Country.

We did this book for book discussion, and over bison stew--made by yours truly--came to the consensus that we loved this book. We agreed that we had to keep reminding ourselves that it was fiction. We were amazed that the author, Jim Fergus, could do such an amazing job from a women's point of view. May Dodd kept a journal from the beginning of the journey to the end. The deal is that the women have to stay with the Cheyenne for two years, have a child, then they are free to do what they want. All teh women had been pardoned so they didn't have to fear being returned to prison, instituions or home. The writing about the lives of the women while living with the Cheyenne is wonderful. How the women adjust to the life among a different people, a people who they have been taught to fear, does take some time but when they realize these are not the vicious savages they had heard about, life isn't awful The women learn to ride horses, eat different foods then they were used to, (choked, boiled puppy was a big favorite in the Cheyenne diet) cook, pack up and move, and live in crowded teepee's. Cheyenne braves could have more then one wife and, yes, they all lived together. The women are amazed at how accepting the Indians are of someone being different and how they hold them in high regard. Half-breeds, who the white man considered as beneath them, the Indians believed to be special and treat them with respect. When the women see the affects of liquor on the Indians they realize that not everything the white people have brought the Indians is good.

The historical writing has been well researched. The violence between the different tribes, the distrust between the Indian and the white man, and the government reneging on the "deal" that was made; the Indians had forfilled their part of the deal, delivered the one thousand horses, but no more white women were coming. When gold is discovered in the Black Hills, the Black Hills that had been given to the Sioux and Cheyenne "forver and ever" in a treaty, all hell breaks loose when the news reaches the East as the mad rush for gold begins.

One of the most interesting things about this book was that author, a male, could write with such insight about women. Fergus made his female characters strong, independent and definitely before their time. We had to keep reminding ourselves reading the book that this was fiction.


The book came to an end that was not one any of us liked...

I highly recommend this book if you enjoy historical fiction, or... even if you don't.

You got me intrigued with this one, Bev. And its in audiobook, too. Thanks for this.

It is a good one. I am giving some copies for Christmas gifts. The men in our book group liked the historical aspect, which is so well done. Enjoy, and let me know what you think!
Thanks for stopping by...always good to hear from you.